MINNEAPOLIS: Violent protests erupted across the United States late Friday over the death of a handcuffed black man in police custody, with murder charges laid against the arresting Minneapolis officer failing to quell boiling anger.

Demonstrators clashed with police for a fourth straight night in Minneapolis, but riots also raged from New York to Los Angeles in one of the worst nights of national civil unrest in years.

In Atlanta police cruisers were attacked and set ablaze as rallies spun out of control, while in the capital Washington protesters collided with Secret Service agents in heated midnight scenes in front of the White House.

In Minneapolis, Derek Chauvin, the white officer filmed kneeling on the neck of a handcuffed and unarmed George Floyd for nearly nine minutes, was charged with one count of third-degree murder — unintentionally causing a death — and one count of negligent manslaughter. 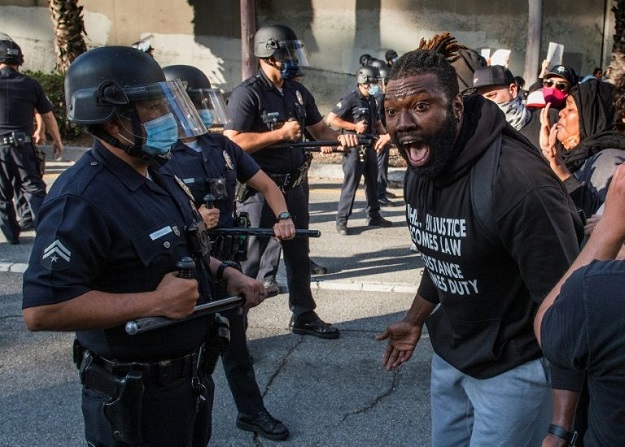 A demonstrator confronts police in Los Angeles as he protests the death of George Floyd in police custody in Minneapolis. PHOTO: AFP

“This case is now ready, and we have charged it,” said county prosecutor Mike Freeman amid outrage over the latest death of an African American in police custody.

But the charges failed to calm a shaken nation whose deep wounds over racial inequality have been torn open anew, and as the deadly coronavirus pandemic sets Americans further on edge.

Authorities imposed a curfew Friday in Minneapolis after three nights of violent protests left parts of the city in flames.

But protesters, many wearing masks to prevent the spread of coronavirus, defiantly remained on the streets, in cat-and-mouse face-offs with police who fired tear gas and flashbangs in efforts to regain control.

Protester Naeema Jakes said she needed to be on the streets so she could verbally confront officers.

The 46-year-old Floyd’s relatives — who spoke Friday with President Donald Trump — welcomed news of the arrest as a “step on the road to justice.”

But they said they hoped for tougher charges and action against the other officers involved in Floyd’s detention and death.

Freeman said the three officers were also under investigation, and that he anticipated charges would be laid.

All four were fired from the police department Tuesday after video surfaced of Monday’s arrest.

The announcement of charges came hours after hundreds of troops were deployed to the streets of Minneapolis and St Paul.

Scores of buildings have been burned and looted across the so-called Twin Cities, including a police station associated with the four officers. 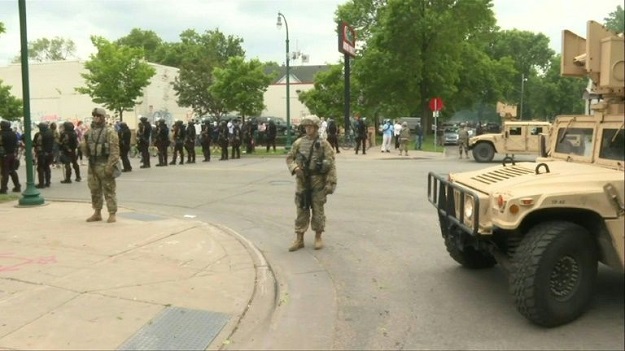 “All I can do is just cry, and cry some more,” Tara Balian, 39, told AFP. “It’s taken this long for people to realise that black lives matter.”

Police in riot gear were out in force in other cities to prevent outbreaks of violence and looting, but protests took hold in Boston, Dallas, Denver, Des Moines, Houston, Las Vegas, Memphis, and Portland.

Floyd’s family issued a statement acknowledging Chauvin’s arrest, but said the charges against him were insufficient.

“We want a first-degree murder charge. And we want to see the other officers arrested,” they said in a statement. 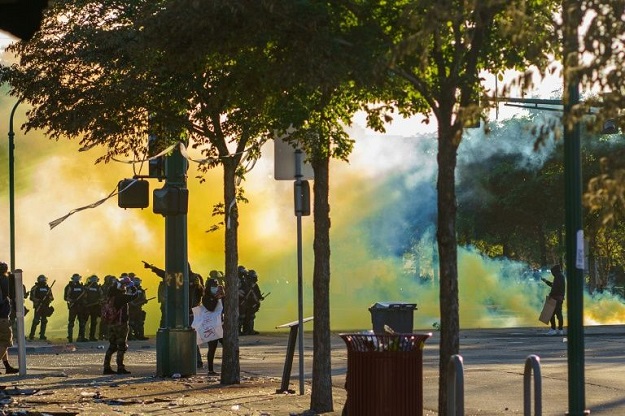 Authorities imposed a curfew Friday in Minneapolis after three nights of violent protests left parts of the city in flames. PHOTO: AFP

“The pain that the black community feels over this murder and what it reflects about the treatment of black people in America is raw and is spilling out onto streets across America.”

The third-degree charge though reflected the official autopsy saying that Floyd did not die of asphyxiation or strangulation.

After attacking the protesters as “thugs” and threatening to send in federal troops to deal harshly with them, Trump shifted tone later Friday, announcing he had called Floyd’s family to express his “sorrow.”

“I understand the hurt, I understand the pain. People have really been through a lot,” said the president, who stands accused of stoking tensions with a series of provocative tweets.

He called for justice and said it was time to heal the “open wound” of systemic racism in the United States. 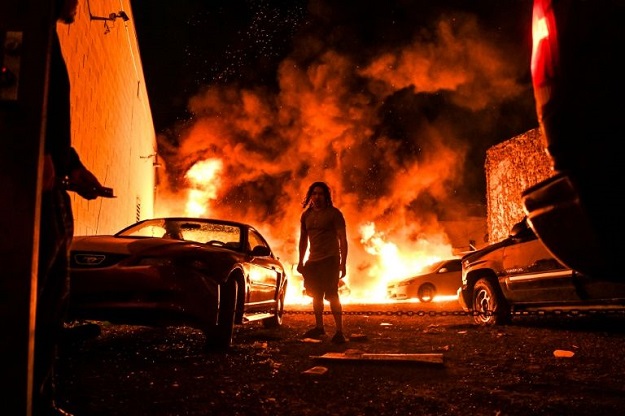 Cars were set on fire in Minneapolis during demonstrations against the death in police custody of unarmed African American George Floyd. PHOTO: AFP

Floyd’s death is reminiscent of the demise of Eric Garner, who died in police custody in New York in 2014.

“Now we have to be here for George Floyd,” Garner’s mother, Gwen Carr, told protesters in New York on Friday.

“Enough is enough. They have to stop coming into our neighbourhoods and brutalizing and terrorizing and murdering our young men and women.”