While defending the World Health Organisation (WHO) in the battle against novel coronavirus, China has said that the health body has done a “good job and performed its mandate” but accused some in the United States of pushing the  two countries to the brink of a “new Cold War”.

US-China ties have nosedived since the outbreak of the coronavirus, with the administrations of President Donald Trump and President Xi Jinping repeatedly trading barbs over issues related to the pandemic, especially US accusations of cover-ups and lack of transparency.

The two top economies have also clashed over Hong Kong, human rights, trade and US support for Chinese-claimed Taiwan.

During the annual news briefing on the sidelines of National People’s Congress meetings in Beijing on Sunday, Chinese State Councilor and Foreign Minister Wang Yi said that his country has no intention to change, still less replace, the US.

“It’s time for the US to give up its wishful thinking of changing China or stopping 1.4 billion people’s historic march toward modernisation”, he added.

Wang expressed his deep sympathies to the US for the pandemic, where the death toll is expected to surpass 100,000 in the coming days, the highest number of any country. 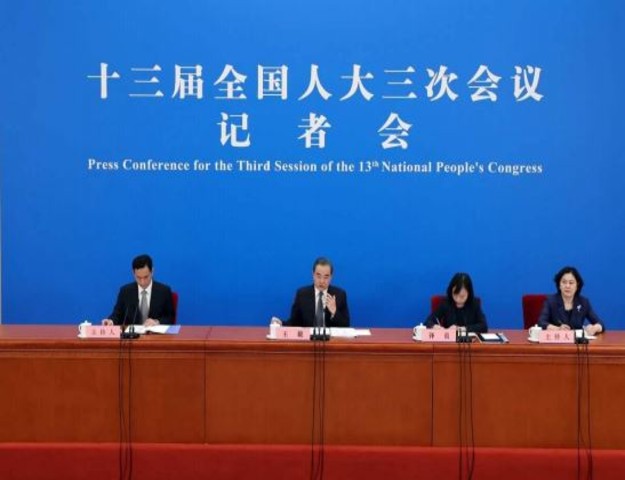 “What China and the United States need to do the most is to first learn from each other and share their experience in fighting against the epidemic, and help each country fight it.”

Wang offers strong support for WHO

Wang also offered his strong support for the WHO and its chief, Tedros Adhanom Ghebreyesus, frequent targets of US criticism.

“To support the WHO is to support saving lives. This is the choice any country with a conscience should make,” he said.

Trump, who has accused the agency of being “China-centric”, has threatened to permanently halt funding to the WHO and to reconsider his country’s membership of the agency.

“If the WHO does not commit to major substantive improvements within the next 30 days, I will make my temporary freeze of United States funding to the WHO permanent and reconsider our membership,” Trump told its chief, Tedros Adhanom Ghebreyesus, in a letter posted on Twitter.

Chinese FM said that some American politicians have rushed to attach a geographical label to the virus, politicise its source and stigmatise China.

‘Afghanistan closer to realising peace than ever’

To a question about Afghanistan by APP’s representative during the conference, Wang said that the fast-moving events in recent months have taken Afghanistan closer to peace than ever, but the road ahead is far from smooth.

‘BRI affected to some extent but only temporarily’

He admitted that China’s multi-billion dollar Belt and Road Initiative (BRI) has been affected by the coronavirus pandemic, but said that the impact is “temporary and limited”.

He said that many of the infrastructure and livelihood projects have played a vital role in Covid-19 response.

“For example, energy projects along the China Pakistan Economic Corridor have kept running and provided one-third of the country’s electricity,” he added.