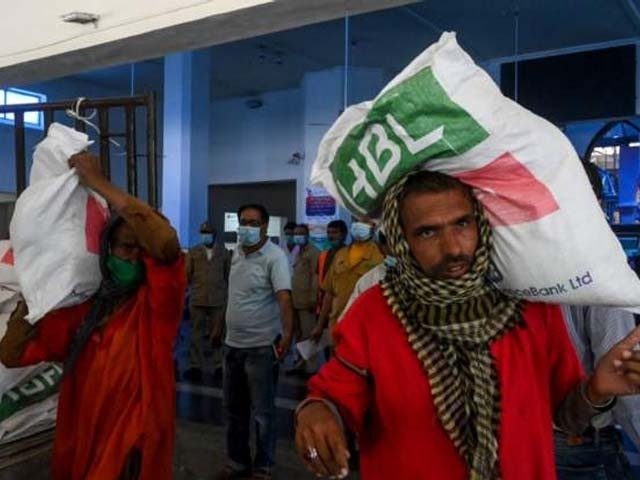 A potential risk posed by the Covid-19 pandemic is rising food insecurity and its potentially debilitating impact on local and global food systems, especially in developing countries. According to the United Nations World Food Programme (WFP), nearly 265 million people could possibly have to face acute food insecurity, as opposed to 135 million people prior to the advent of the pandemic, by the end of 2020. Even before the pandemic, a worldwide food-price spike was expected to occur. According to the United Nations (UN), an unprecedented humanitarian crisis of “biblical proportions” may result from Covid-19 and the global fear that people may not have access to food can double by the end of this year. Apart from the virus, food security in Pakistan is concurrently threatened by natural calamities such as recurrent droughts and worsening locust infestations. WFP Executive Director David Beasley said,

“In a worst-case scenario, we could be looking at famine in about three dozen countries.”

On the demand side, these past few months have witnessed people panic buying and hoarding food supplies which may have caused price spikes and increased price volatility. In response, whereas global food supply chains are functioning well, there is a high probability that both food production and distribution will be severely hampered due to the advent of this virus. The 27 million people living across 35 countries on the brink of famine before this virus hit would find it extremely difficult to survive both during and after the pandemic. As this pandemic evolves, some of the mutual risks faced by vulnerable populations worldwide would be the adverse impact on planting due to reduced input access and on harvesting, with sales being disrupted by inadequate labour and lower purchasing power. Lack of adherence to physical distancing and limited transport and market access would also hamper the global food system.

According to the World Bank, food security “hot spots” include countries suffering from multiple crises such as extreme weather or pests, having a significant proportion of a poor and vulnerable population, and countries experiencing significant currency depreciation. Unfortunately, Pakistan fits into all three categories. With agriculture contributing 19.5% to total GDP and providing employment to 42% of the labour force (of whom up to 70% are women), a significant proportion of the agricultural population is concentrated in rural areas and works in the informal sector. According to the WFP, 20.5% of Pakistan’s population is undernourished and 39.6% of the people face food insecurity. According to Nomura’s Food Vulnerability Index, Pakistan is one of 50 economies considered most vulnerable to a food price surge. Even well-developed economies are highly susceptible to suffering from food price spikes since these inadvertently lead to driving a bigger wedge between the rich and the poor, thereby exacerbating prevalent inequality levels.

Populations most susceptible to suffer from food security issues are day labourers striving to make ends meet, low-income urban households, small-scale farmers as well as female-headed households. The situation of Pakistan with respect to food security can be succinctly described by a recent piece from the Agricultural Market Information System which states,

“Moreover, low reserves of food staples, a common characteristic of low-income countries and households, limit the ability to modulate food supplies in instances of production shocks and interruptions to trade, extenuating vulnerabilities.”

Because of this, many countries and organisations are striving to ensure that markets are well-supplied and consumers have ease of access to basic food items despite lockdown restrictions and income losses. Anticipatory action to avert the emerging food crisis needs to be urgently taken and cannot be left unaddressed until this health crisis is resolved. The Global Covid-19 Humanitarian Response Plan aims to address food security concerns, with $2 billion set to be used by the UN as part of its response efforts. To monitor food and agriculture supply chains and help alleviate the current food security crisis, the World Bank is helping several countries including Angola, Democratic Republic of Congo, Haiti, India, Kenya, Liberia and Tajikistan. In Pakistan, it aims to provide direct livelihood support to female-headed households so that they can be involved in projects such as kitchen gardening and participating in small-scale livestock and agricultural activities.

To curb the looming threat that this pandemic coupled with food insecurity poses, the Food and Agriculture Organisation (FAO) in Pakistan has partnered with the Ministry of Health and other UN agencies to distribute 80,000 informational materials, share social distancing guidelines via radio, and utilise its farmer field school network to raise awareness through firsthand participatory demonstrations. With food insecurity having far-reaching implications such as instability and conflict, it is of paramount importance that the government is able to provide shock-responsive social protection so that hunger catastrophes such as the one looming in the near future for this country can be duly averted.

The writer is a recent graduate from the University of Warwick and is currently working in the development sector of Pakistan.

The psychological impact of Covid-19 on youngsters