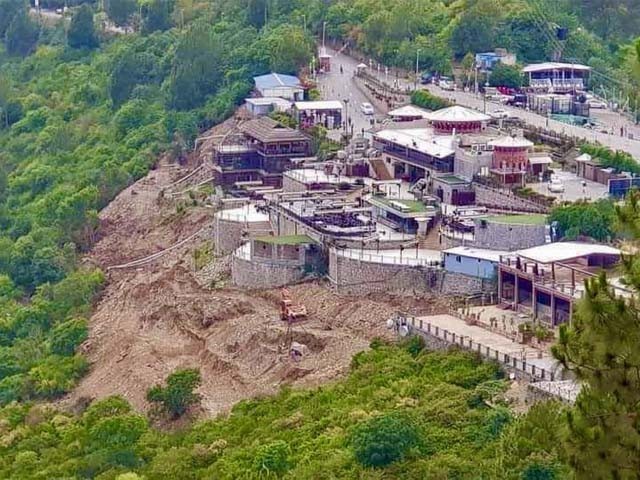 A view of the construction at Monal. PHOTO: TWITTER/MALIK AMIN ASLAM

I’ve never liked going up to the touristy Monal restaurant up in the Margalla Hills National Park adjacent to Islamabad. Why would anyone allow a large concrete monstrosity to be constructed inside a national park, which is supposed to have reserved flora and fauna with no human intervention? We would hear the usual stories about the “influential people involved” and despite sporadic protests in the media and occasional rulings by the Islamabad High Court and even the National Assembly, no action was ever taken. In fact, Monal became even bigger, adding more patios to its spacious outdoor seating area.

The owner, Luqman Ali Afzal, who claimed he had won the bid for the 15-year lease fairly from the Capital Development Authority (CDA) back in 2006, was even awarded a Pride of Performance for his entrepreneurship recently by the president of Pakistan. Monal became such a successful brand over the years that he branched out into wedding halls and catering.

Up until this week, it seemed that we had all been resigned to the fact that Monal was now a permanent feature of Islamabad’s landscape and in fact a popular tourist site for visitors to the city. However, its complacent owner clearly went a step too far when he decided to undertake a quick expansion during the recent lockdown in the country due to the coronavirus. While most restaurants were shut and people in the capital quarantined inside their homes, the owner decided to bring in heavy equipment and cut down around 300-400 trees in five acres of forest land in the vicinity of Monal.

The restaurant’s workers were busy laying down exotic grass on the degraded hillside when they were caught red handed as the lockdown eased last week and images of the carnage came out onto social media. The explanation given by the restaurant was that it was merely a “beautification activity to avoid bushfires”. They said in a public notice that they were going to plant flower-beds and lawns instead. But how can it be allowed to landscape a wilderness is what seems to have outraged most people. The Supreme Court and even the prime minister took notice of the deforestation on Monday and the restaurant was quickly sealed off.

On Wednesday, Advisor to the Prime Minister on Climate Change Malik Amin Aslam, visited the site to see for himself what had happened on the ground. He invited along media personnel, environmentalists and the head of the Islamabad Wildlife Management Board, Dr Anis ur Rahman (who now manages the Margalla Hills National Park). Aslam, who has been spearheading the 10 Billion Tree Programme across Pakistan, had already initiated an FIR against the culprits, citing the Margalla Hills National Park to be “a national resource which shall be protected at all costs”. He also told the small gathering who toured the degraded hillside with him that “the sanctity of the national park has to be protected at any cost”. Rehman said he intends to re-wild the levelled area and he planted a pine sapling on the spot to “symbolically reclaim the area”. 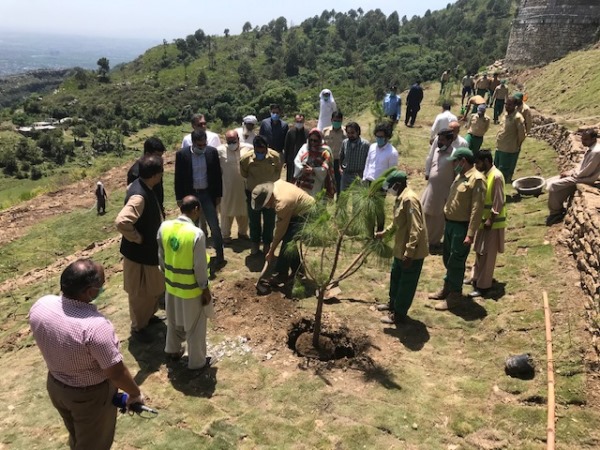 Dr Anis ur Rahman planting a tree on the degraded hillside. 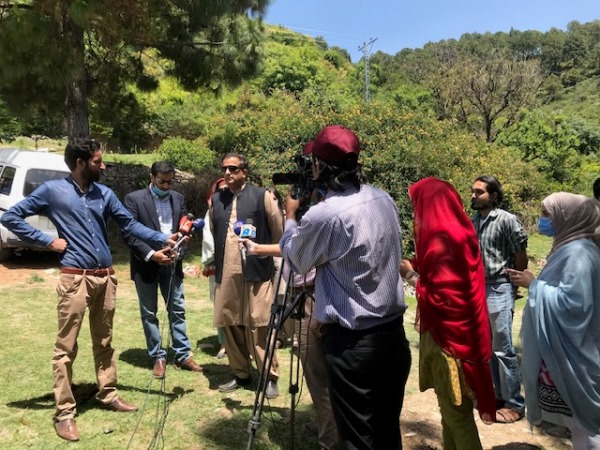 Malik Amin Aslam at the site.

Aslam has ordered a report to look into the matter of how this happened during the lockdown period. He said his ministry would even look into how Monal was constructed inside a national park in the first place and how they had dared to embark on an expansion spree without permission. He said,

“Clearly land grabbing has taken place inside a national park. We want to send out a strong signal of zero tolerance. We want to make an example so nothing of this sort happens again”.

Margalla Hills National Park is spread across 125 square kilometres and already there are a number of settlements inside the park like Saidpur Village and several local villages. It’s a constant battle to keep out encroachments and enforce national park rules. Monal is probably the most visible encroacher of the park’s forest land. Most weekends the winding road leading to the restaurant is packed with cars, which disturb the wildlife of the park. It was then chairman of the CDA, Kamran Lashari, who had the winding road up to Monal expanded and lit up with street-lights which stay on throughout the night. He is alleged to have been behind the construction and leasing of Monal, the modelling of Saidpur Village and the establishment of Rawal Lake Park, amongst other developments in the capital. He was removed from chairpersonship of the CDA in 2008. 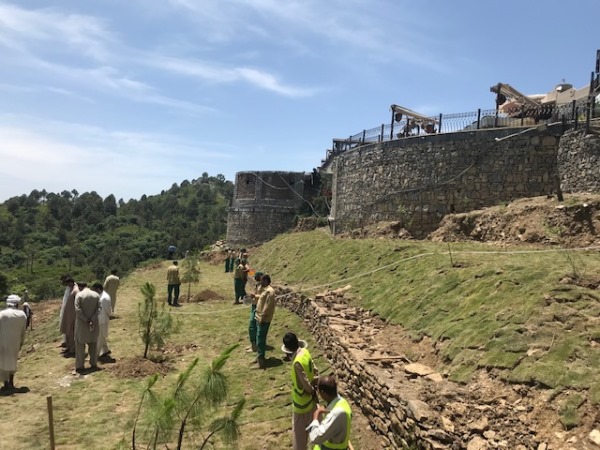 In my younger days all we had was Daman-e-Koh, the lovely viewing point and hill top garden from where one could watch the sun set over the capital. I remember a few khokas (kiosks) selling chips and cold drinks, which was all one really needed – families would often bring picnics with them and leave once it was dusk. There were also several garbage bins located inside the gardens. Monal was built a few kilometres uphill from Daman-e-Koh on Pir Sohava road on a breezy hilltop with great views of the city, especially at night. 15 years have passed since then and Monal might well be an iconic eatery of the city, but its owner has clearly bitten off more than he can chew with his brazen cutting of trees and shrubs around the restaurant. People are justifiably horrified and are now questioning whether the busy restaurant has the right to operate deep inside a national park.

Imran Khalid, an environmentalist and researcher at the Sustainable Development Policy Institute in Islamabad best sums up the feelings of most environmentalists in the capital,

“The next step should be to shut down Monal as its presence goes against the premise of a national park. Its construction is in fact against the spirit of the law. No environmental impact assessment was conducted. The issue was forced. Moreover, its operations are a hazard to the environment and wildlife. Turn it into the ‘Margalla Nature Center’ where school children can visit and learn about the flora and fauna and the role they play in our ecological well being”.

All photos courtesy of Rina Saeed Khan and the members of Reclaim Green Islamabad.

The author is an environmental journalist based in Islamabad. She most recently authored the book, "From Mountains to Mangroves: Protecting Pakistan's Natural Heritage" on her travels throughout Pakistan. She tweets @rinasaeed (twitter.com/rinasaeed)

How successful was COP25?

How Greta Thunberg galvanised the crowds at COP25