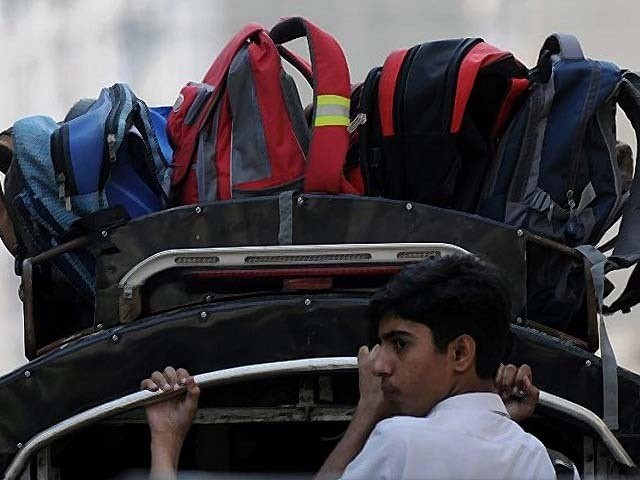 Pakistani schoolchildren hold on to rails as they travel on a school van. PHOTO: AFP

Around 6.7 million children were out of school in Sindh even before the pandemic brought its carnage to Pakistan. The province was already in a learning crisis and the ongoing pandemic will further strain the education system while negatively impact learning outcomes. It is undeniable that it was the need of the hour to shut down educational institutes, as keeping them open would further exacerbate the ongoing health crisis. But now as educational institutions gear up to open on July 15, the situation is calling for difficult decisions yet again.

Policymakers are faced with a strange dilemma, where when they do not reopen educational institutions, the impact on the economy, both in terms of the actual monetary impact and students not getting the desired or deserved education, will deepen. But if schools, colleges and universities are reopened, policymakers will also have to take into account the risk of infection to both the students, staff and the resulting load on the healthcare system.

Then there are news reports which suggest that educational institutes may not open on July 15th at all and may remain shut for another six months even. This adds to the students’ problems, especially as, the concept of homeschooling is barely adopted in Sindh, and many parents can either not teach the course material to their children or are simply not even aware that such options exist.

Even though, some schools in the private sector have moved towards online modes of education, the numbers are not large enough. Owing to connectivity issues, as well as the novelty of the setup, there is a lot of trial and error involved, leading to uncertainty for everyone, especially since some assessments have also moved online. Some exams on the other hand have been downright cancelled. Perhaps the most worrying part about this disruption is how it will increase the inequality between those who are able to access education by any means right now and those who are not.

This will not be all. The closing of schools is already causing a ripple affect that has increased the instances of child abuse as they are home more and in the future it will result in an obvious learning loss, along with increased dropout rates especially in the lower income households, more educational disparity especially between the public and private educational sectors and it will also affect the demand and supply of education. The increased dropout rates in lower income households will as a result, bring an increase in other menaces such as child labour and marriages as well. Not to mention the long-term impact of children that are suffering through a pandemic without going to school and their friends, with an increased likelihood of either experiencing violence first or second hand.

Other impacts of the pandemic on the education system may include a cut in funding from the government, leading to a further decline in the quality of education in  the province. With a drop in funding, teaching jobs may also not remain as lucrative, adding to the dearth of good teachers.  If this remains the case, over the years, skilled human capital will also decline, adding to unemployment and social inequality.

All hope is not lost and we still have time to quickly move towards strategies to aid continuous learning but to also take steps to make the return of the students and staff safer. Acknowledging how the education system in place was not working is a huge step that we can take, with a focus on revamping it entirely. Policymakers need to focus on managing the situation at hand, while creating a policy framework that accounts for the accelerated learning gaps resulting from the disruption.

One way to do that is to ensure that funding allotted for education must not be compromised on, so if it cannot increase, it definitely should not decrease even if education seems like an easy target when deciding budget cuts. While, as discussed, there is an essential need for SOPs guided by medical teams for a safe return of staff and students, mental health aids, in the form of therapists or counselors should also be looked into. Syllabus and course planning need to be revised especially for public schools and perhaps, uniform platforms can be created where syllabi can be decided in tandem by both the private and public sector.

It is important that we do not repeat the mistakes of the past when we come back to teach our youth and in turn empower our nation. If schools indeed are to remain shut for the next six months, option of remote learning need to be developed beyond just a single TV channel. Student loans and other incentives should also be offered to ensure that children come back to school and do not quit due to financial reasons.  Parents should also be given training or at least the opportunity to be more involved in their children’s activities, especially when it comes to government schools. This is the best time to revamp an ailing system, but this is also a sensitive time, where decisions, especially related to education, will have the potential to haunt us for a long time to come.

The author is a Member of the Provincial Assembly of Sindh, an IT professional and an education activist. She tweets @rabiaazfar (twitter.com/rabiaazfar)

Abandoned and neglected, Sindh's orphans continue to suffer in silence

The deliberate collapse of education in Sindh, courtesy of PPP

No water, no electricity, no education – When living in rural Sindh is worse than a death sentence