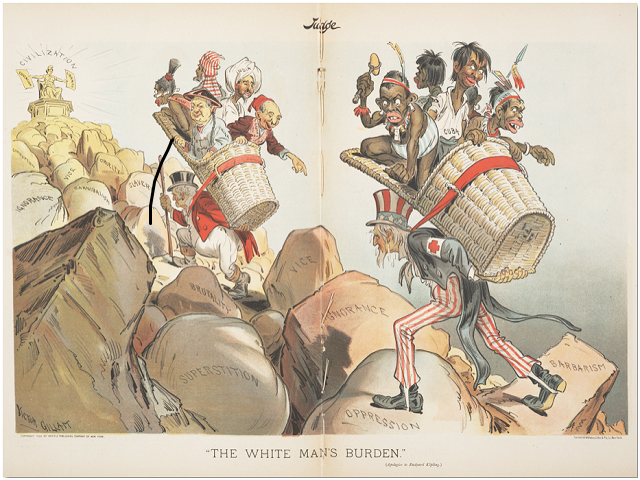 What was once hailed as a tribute or even a sort of egging on of imperialism by Rudyard Kipling in his poem of colonial days, “The White Man’s Burden” is now something that can barely be acknowledged as a distant truth. The coronavirus, it seems, has exposed all the nations for what they are truly worth and it has shattered the delusions of many. Is this the burden and duty, Kipling was talking about? Are their sons ready now to come out of their homes on exile, to want in heavy harness and to teach the sullen half devil and half child people of the other world?

The virus has wreaked havoc on most healthcare systems but the ones in Europe and America have seemed to all but collapse, even though they were hailed as one of the best in the world. Even the level of awareness and the education systems of such first world countries has been exposed, as people continued to go about life as usual, despite warnings from their respective governments.

And what to say about the governments themselves, US President Donald Trump has watered down the threat posed by the virus several times, calling it the common cold. Being as racist as he has always been, Trump has gone so far as to call the virus Chinese and has chided the World Health Organisation for siding with China during the pandemic. I think it just goes to say that unlike Kipling suggested, ‘to seek another’s profit. And work another’s gain’, those who consider taking on the so called ‘white man’s burden’ can barely look at what their own country stands to gain from seriously considering the threat of the coronavirus.

Then there is England’s Boris Johnson, who refused to socially distance himself, shaking hands and meeting everyone he possibly could. That is until he was infected by the virus himself and ended up in the intensive care unit. Since then his stance has seem to take a 180 degree turn and he is now regularly telling people to socially distance themselves and stay indoors.

It is a wonder for someone like me, who looked at the white colonisers and saw impermeable countries, to see them all scramble and falter, while the virus shows no mercy. Ventilators have run out and life is at a standstill and for once the countries that have waged wars on the pretext of knowing better and the resultant safety for their people, do not have answers, for themselves or the rest of the world.

China on the other hand, was quick to account for this gap left behind by the first world and was not only able to control the virus inside the country under two months but also lend a helping hand wherever it was necessary, by either sending in medical equipment, or monetary aid and in some cases even medical teams.

The data that BBC shared recently is also showing how the numbers in the Asia Pacific region, including Pakistan, India and Singapore have not been as high as the numbers of people infected in the west. Although one can argue that this is happening for many reasons, especially the most sinister one that is the lack of testing, it is still strange to see that the countries that would dictate the course of action for the world cannot seem to get a grip on the situation at home.

It is perhaps time for us to rewrite Rudyard Kipling’s poem, and reimagine the white man’s burden as well as the resulting privilege that is bestowed upon them.  The white leaders of today can now stop worrying about the developing nations they sought to build and focus on their own empires almost laid to waste by an unseen microscopic enemy.

The research for the vaccine is in full swing and it is more than likely for it to emerge from a white nation but that being said, there is a serious need for the world to evolve beyond thinking that a particular nation is superior, owing only because of its skin colour or the way they have been able to adapt to technology. Because in this crazy world, anything can happen and with that I would like to also say, I am sorry Kipling, but it is time, you carry your own burden.

The writer is an assistant professor in Islamabad and tweets @RizwanRaunaq