KARACHI: Multinational companies have continued to inject fresh investment into ongoing projects in different sectors of Pakistan’s economy like telecommunication, power, and chemical despite the global economic crisis sparked by the coronavirus pandemic.

Foreign direct investment (FDI) rose 32% to $133.2 million in April 2020 compared to $100.8 million in the same month of the previous year, the State Bank of Pakistan (SBP) reported on Monday.

Although the volume of investment stood at an eight-month low in April, “what is encouraging is that investors have continued to pour fresh capital into ongoing projects in Pakistan despite the global economic recession under Covid-19,” Overseas Investors Chamber of Commerce and Industry (OICCI) Secretary-General M Abdul Aleem remarked while talking to The Express Tribune.

Moreover, the nature of investment stands diversified. Companies from multiple countries have poured new investment, unlike Chinese firms which have been the only major investors in Pakistan in recent times. 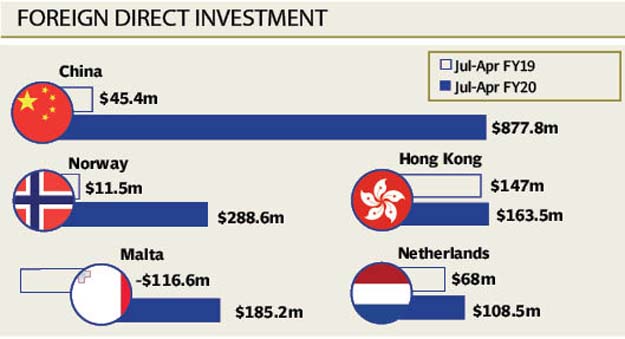 FDI should improve in the months to come as countries are slowly lifting lockdowns in a bid to revive economic activities around the globe. Accelerating the activities, however, may remain a challenge in the absence of a coronavirus vaccine and medicines.

Cumulatively, in the first 10 months (July-April) of the current fiscal year, foreign firms injected FDI worth $2.28 billion, which was more than double the investment of around $1 billion in the same period of the previous year, according to the central bank.

Before the outbreak of Covid-19 late in February in Pakistan, foreign investors seemed poised to initiate new projects in the country. They, however, have put the projects on hold in response to the virus.

“In the recent past, some foreign companies made a new investment in food, energy, and telecom sectors in Pakistan,” Aleem said.

Cumulatively, in the first 10 months of FY20, China was the biggest investor, with FDI worth $877.8 million compared to $45.5 million in the same period of last year.

However, in the same period of the previous year, the UAE was the largest investor with a net investment of $159.7 million, followed by Hong Kong at $147 million, while Japan invested $95.8 million.

Cumulatively, in 10 months, power, communication, and oil and gas exploration sectors were the top three sectors that attracted significant investment.

Although foreign investors continued to remain net sellers at the Pakistan Stock Exchange (PSX) in the first 10 months of FY20, they slowed down selling compared to the same period of last year.

They offloaded stocks worth $182.7 million in July-April FY20 compared to $408.1 million in the same period of last year, according to the central bank.