There was a twist in the controversy surrounding alleged remarks of sexual assault made by schoolboys in a closed social media chat when the Delhi Police said that the conversation which brought the issue to light was never discussed on the “Boys Locker Room” group.

In fact, the police said that the conversation — in which a boy was ostensibly instigating his friends to assault a girl from their class — was a separate chat that was instigated by the same girl who was the supposed target of the crime.

“The girl had created a fake Snapchat account to test the values and character of her male friend. She wanted to check the boy’s reaction when someone suggested something like that to him, and particularly when someone spoke about her. So she created a fake account in the name of a fictional boy called Siddharth. Using that fake account, she began a one-on-one conversation with him, and suggested the sexual assault idea,” said Anyesh Roy, deputy commissioner of police (cyber crime).

“The screenshots of their private conversation were mixed with the objectionable screenshots from the Instagram group ‘Bois Locker Room’,” he added.

Screenshots of the objectionable conversation surfaced earlier this month, leading to social media outrage, and prompting the Delhi Police to register a case.

An 18-year-old and a minor boy have been held in connection with the “Bois Locker Room” group’s activities, and 24 members of that group, including 16 minors, have so far been identified, examined, and their mobile phones seized for forensic analysis. Many of them study in reputed schools across Delhi.

Roy said that when the police began investigating that conversation, it turned out that the conversation in question and the group were not connected.

“On Snapchat, the boy refused to participate in any discussion against the girl, and ended off any further conversation with the fictional Siddharth. He also took screenshots of that chat, reported it to his friends, and to the same girl who had created the fake account. Since the girl knew the truth behind that conversation, she did not report it to anyone,” said the DCP.

One other recipient of the screenshots posted it as an Instagram story, which went viral on social media. When the “Bois Locker Room” chats emerged, this Snapchat conversation got mixed with them, Roy said. 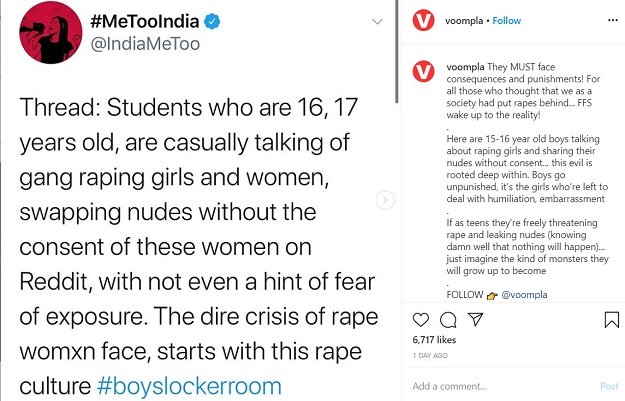 The police are unlikely to pursue any punitive action against the girl, said another investigator who did not want to be identified. “The girl and boy who were part of this conversation had nothing to do with the Instagram group chat. Both are separate issues,” the investigator said.

The police, meanwhile, are continuing to investigate the ‘Boys Locker Room’ episode.

“We have received a response from Instagram who we had asked for details of the members of the group. They have shared partial information about three Instagram accounts,” Roy said.

On the Instagram group, the members were allegedly discussing about morphing the images and leaking photos of girls known to them. The police have screenshots of the same.

Jyoti Duhan Rather, a member of the Delhi Commission for Protection of Child Rights (DCPCR), said that the incident should be treated with maturity.

“The children at this age are vulnerable, be it a boy or a girl. Children of both genders need proper guidance, counselling and supervision of parents, family and teachers. We must be as a reformer for them and they must not be treated as criminals,” she said.

The article originally appeared in The Hindustan Times