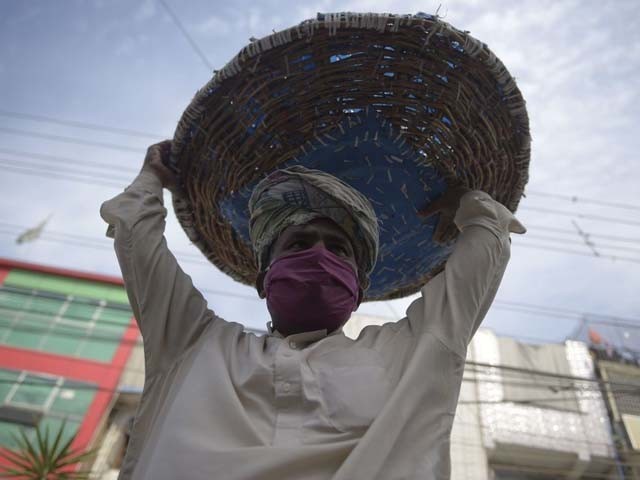 A labourer wearing a face mask carries his basket as he searches for customers. PHOTO: AFP

Since the advent of Covid-19 last December, the global death toll has surpassed the 300,000 mark, with this estimate continuing to rise with the passage of time. However, the final toll of individuals who will be subjected to the economic devastation wrought by the pandemic will far outstrip the number of deaths caused by the virus itself. In its wake, this virus leaves behind people suffering from massive hunger, poverty, disease and violence, ramifications which the earlier number is not able to adequately capture. According to World Bank estimates, Covid-19 is likely to cause the first increase in global poverty since 1998. Even though ascertaining the exact magnitude of poverty against the current backdrop of this devastating pandemic is difficult to during these evolving times, recent estimates suggest that around 40-60 million people worldwide will be pushed into extreme poverty by the end of 2020.

Using the $1.90 per day poverty line, the share of world population living in poverty is projected to rise from 8.2% to 8.6% with a massive jump from 632 to 665 million people. With more than half a billion people slipping into a state of deep destitution, the United Nations (UN) estimates that $2.5 trillion will be needed to help developing countries escape poverty. Prior to the advent of coronavirus, forecasts prepared by the World Economic Outlook predicted a decline in global poverty from 8.1% to 7.8%. Hence, it is disheartening to see that those who were able to escape the throes of poverty earlier have now been pushed deeper into it due to the onset of this pandemic. These numbers have galvanised concerns for the marginalised populations who are more at risk of dying from starvation than from having contracted the virus.

The state of deprivation and impoverishment will be worse in areas where the virus has had the most detrimental impact and also houses the highest proportion of population living close to the international poverty line. The International Monetary Fund (IMF) projects that economies of developed countries will contract by six per cent while those of developing countries will shrink by one per cent. Since a higher proportion of global population living close to the poverty line lives in developing countries, they will suffer the most even in cases where the virus does not have a huge detrimental impact in terms of health, such as in Sub-Saharan Africa. Here, the World Bank projects that a recession will be experienced for the first time in 25 years, with nearly half of all jobs being lost across the continent. South Asia, on the other hand, will be hit harder, with dwindling economic performance the likes of which have not been seen in the past 40 years.

Decomposing these projections at country level reveal India to be the hardest hit (12 million more people falling below the poverty line), followed by Nigeria (five million) and the Democratic Republic of Congo (two million). If the poverty line is increased to $3.20 or $5.50, more than a 100 million people are likely to fall into extreme poverty. Within developing countries, nearly 200 million people work in the informal sector which is presumed to be the hardest hit. Because of this pandemic, the poor have become even more vulnerable since they are unable to sustain themselves by stocking up on essential items like the financially affluent are able to do. Visiting stores frequently increases their exposure to this virus. Coupled with high poverty levels, this pandemic exposes and amplifies preexisting disparities, with the most vulnerable-low-skilled workers, women, LGBTQ individuals, and people of colour suffering the most both within and across countries. What is most worrisome is that these financial shock waves are expected to prevail even when the virus has subsided. According to Dr Abhijit Banerjee, Noble Laureate in Economics of 2019,

“There will be groups of people who climbed up the ladder and will now fall back. There were so many fragile existences, families barely stitching together an existence. They will fall into poverty, and they may not come out of it.”

Possessing the capability to reverse 30 years of economic development, Covid-19 will likely push the developing world into famine and nullify gains made in the global fight against malaria. Pushed to the brink of starvation, families will struggle to make ends meet while trying to thrive during a dire global hunger crisis. Similarly, if all insecticide-treated bed net campaigns are discontinued, progress made in the past 20 years with respect to reducing malaria mortality will be wiped out as death tolls reach as high as 769,000 in Sub-Saharan Africa.

Globally, the world was successful in reducing poverty since the 1990s. In 1990, 36% of the world’s population (1.9 billion people) were classified as poor and living below $1.90 a day. By 2016, this number had significantly dropped to 734 million people who comprised 10% of the world’s population. Significant gains were seen in South Asia, with India being able to successfully lift 271 million people, and Bangladesh around 33 million people, out of poverty. With the advent of Covid-19, this progress may well be reversed, with any further funding for poverty alleviation programmes being stunted or restricted altogether due to the very likely possibility of these countries entering a deep, recessionary phase for the months to come.

The devastating impact this virus will leave will be unprecedented and will be nothing short of causing a ‘poverty tsunami.’ It is imperative that such vulnerable populations are safeguarded against the economic turmoil developing economies will be subjected to. In efforts to alleviate populations from high poverty and indigence levels, a possible measure to bail out developing countries could be the cancellation of $1 trillion in debt and the IMF issuing a further $1 trillion in Special Drawing Rights with increasing the proportion of aid flows and adoption of emergency solidarity taxes. With the coronavirus outbreak, any progress made so far in achieving the Sustainable Development Goals (SDGs) since 2015 has been unfortunately lost and the UN’s commitment to eliminating poverty and hunger by 2030 seems to now be a dream long forgotten.

The writer is a recent graduate from the University of Warwick and is currently working in the development sector of Pakistan.

The psychological impact of Covid-19 on youngsters