SAVIGNARGUES: Confined to his tiny living room ultra-triathlete Pascal Pich is still going a long way in a good cause.

The 56-year-old Frenchman is a five-time world champion of ultra-triathlon in which athletes may swim 3.8 kilometres, cycle 180 kilometres and finish by running a marathon.

While in confinement because of the coronavirus pandemic he has covered 8,000 kilometres (4,970 miles) on a stationary bike on rollers.

His aim, as he pedals like a madman, is to raise money to make the lives of health workers easier. 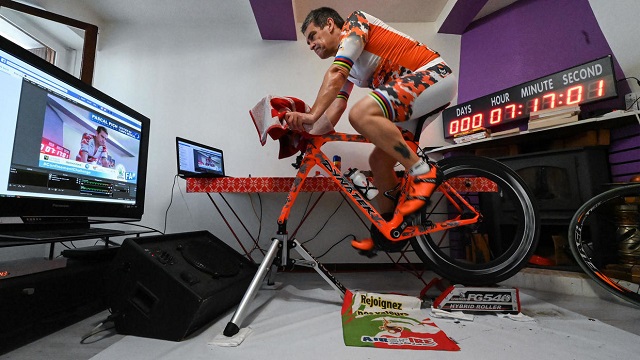 His programme has included a return to an old favourite, the Tour de France. He once rode the Tour route in eight days and eight nights. This time he started out by covering the equivalent of the 21 stages in 14 days without moving from his home in Savignargues, 30 kilometres from Nimes, in the south of France.

“The mileage is quite monstrous but it’s nothing exceptional. What’s exceptional is doing it all alone and locked up,” Pich told AFP. “The idea is just to pedal.”

He goes live on social media every day and one of his sponsors has agreed to contribute money in return for “likes”. They are using the funds to buy equipment, such as coffee machines, microwaves and table-tennis tables for health-care workers.

“One hundred machines have been delivered to the medical staff in 28 different hospitals,” says Pich.

At the start of the official lockdown in France, Pich looked for ways to help those on the front line in the battle against the Covid-19 pandemic.

“Everyone does what they want to do, and I want to pedal, so I pedal,” he said. “I don’t care what other people think! It’s just as stupid to be sitting in your living room in front of the TV knocking back beers.”

After riding the 3,471km of the 21-stage Tour without leaving home, he allowed himself a short week of recovery. Then he climbed back on his stationary bike for 54 hours of racing over six days, the equivalent of a week’s work for the doctors.

Most recently, starting on April 24, he began working what he called 3×8 shifts to mirror the medical teams. “That means eight hours of pedalling, eight hours of recovery”.

He was aiming for 88 hours of cycling in seven days, covering between 250km and 320km in each eight-hour session.

In total, he will have travelled 8,000 km, alone in his small living room with his only view of the outside world the balcony where he hangs his sports clothes to dry. 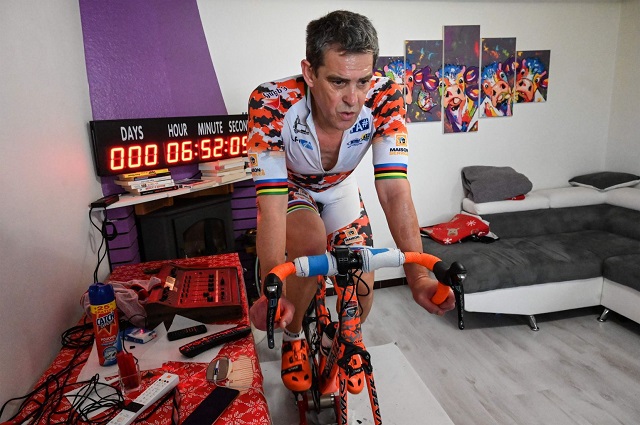 “I’m all alone in the apartment. It’s really hard to deal with because I’m locked in a room that’s about 14 square metres. There is very little air,” says Pich, whose world records include distance covered in six days on a stationary bike (3,165 km), which he set in May 2018.

He is surrounded by electronic displays: a huge timer, like those used at major athletics events, a laptop and a TV screen on which he can watch movies.

“I hope for everyone that this will be the last challenge,” he said. “Because I’m starting to get a bit burnt out, because it will mean we’ve made some progress with this virus. And that the medical staff are a little more relaxed.”